However your life is impacted by arthritis we want to understand more about you so that we can make sure we continue to develop our information, support and services such as the online community.

If you've not already, please take 5 -10 minutes to fill in our survey. All information you provide will remain anonymous and be treated in the strictest confidence. TAKE OUR SURVEY

As many of us use a photo of our pet as our account photo I thought that it may be a nice idea of setting up a Pets' Corner to put larger photos up, photos of them doing something daft, accounts of things that they do, how they support us and so forth. Vixen is the third cat that I have had since leaving the RAF in 1988. My first was called Arnie but he disappeared when my ex-wife moved in with me, I found him elsewhere in the village and brought him home several times but on each occasion he legged it again, if only I had known then what I was later to discover I would have legged it with him! Fluffy was my next cat and she passed away 4 years ago which drastically affected me, more so than my parents passing. I went spiralling downwards until friends presented me with Vixen, initially I was told that she was a boy so I called her Vulcan, that was until I took her to the Vets for her first check up, on chatting to the Vet he announced that he was a she and it was the quickest gender realignment he had ever done! Living alone and virtually housebound (especially now), I would not be without her. I have the names of all 3 cats tattooed on my arm beneath a picture of a Sabre-toothed tiger. 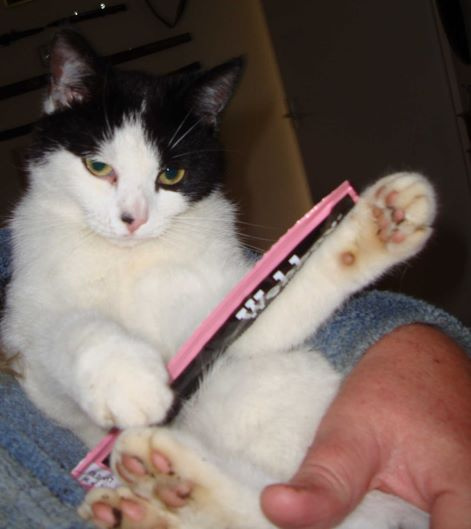 With our helpline, online information and arthritis virtual assistant, you don't need to face arthritis alone.

Get help
Tweets by VersusArthritis